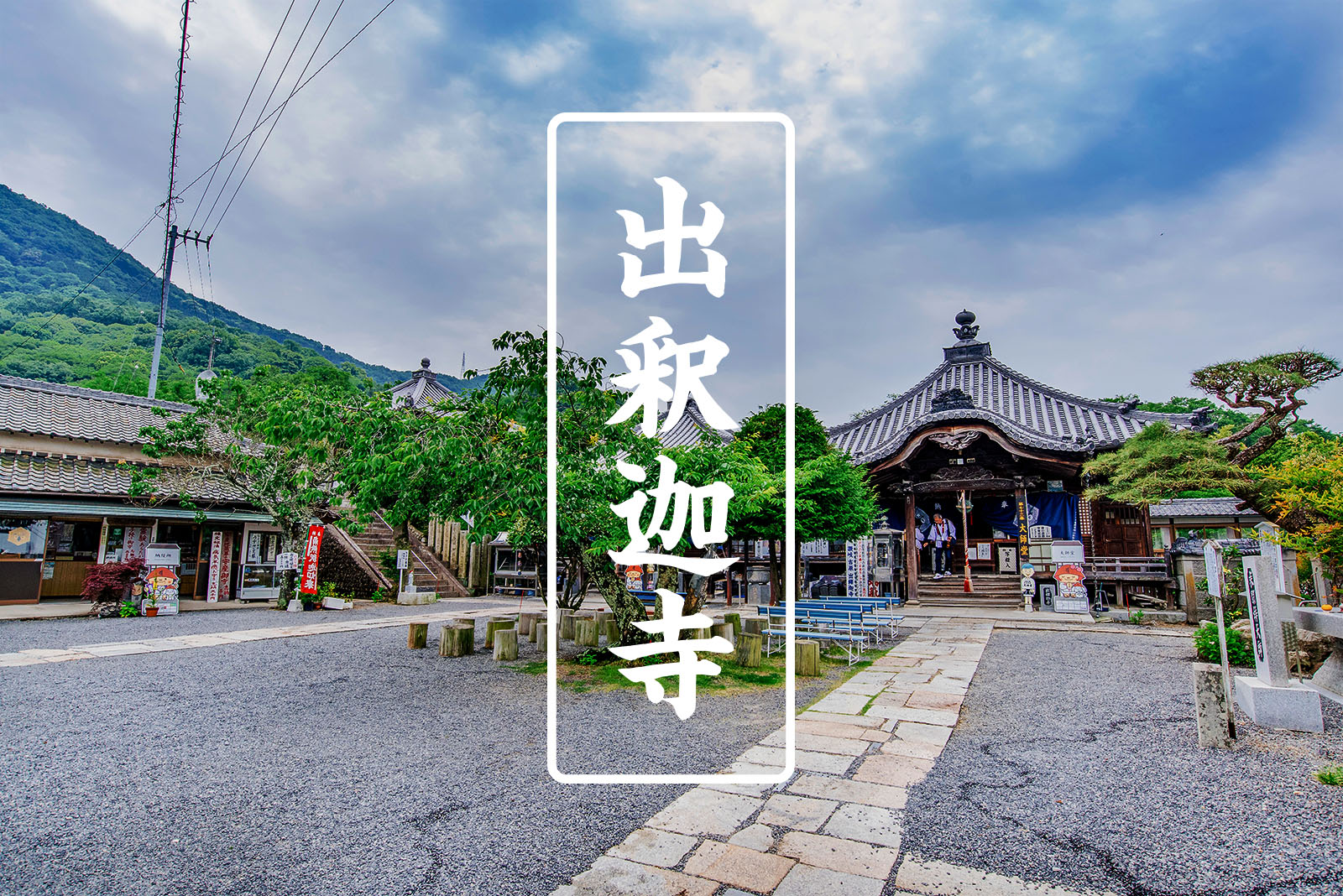 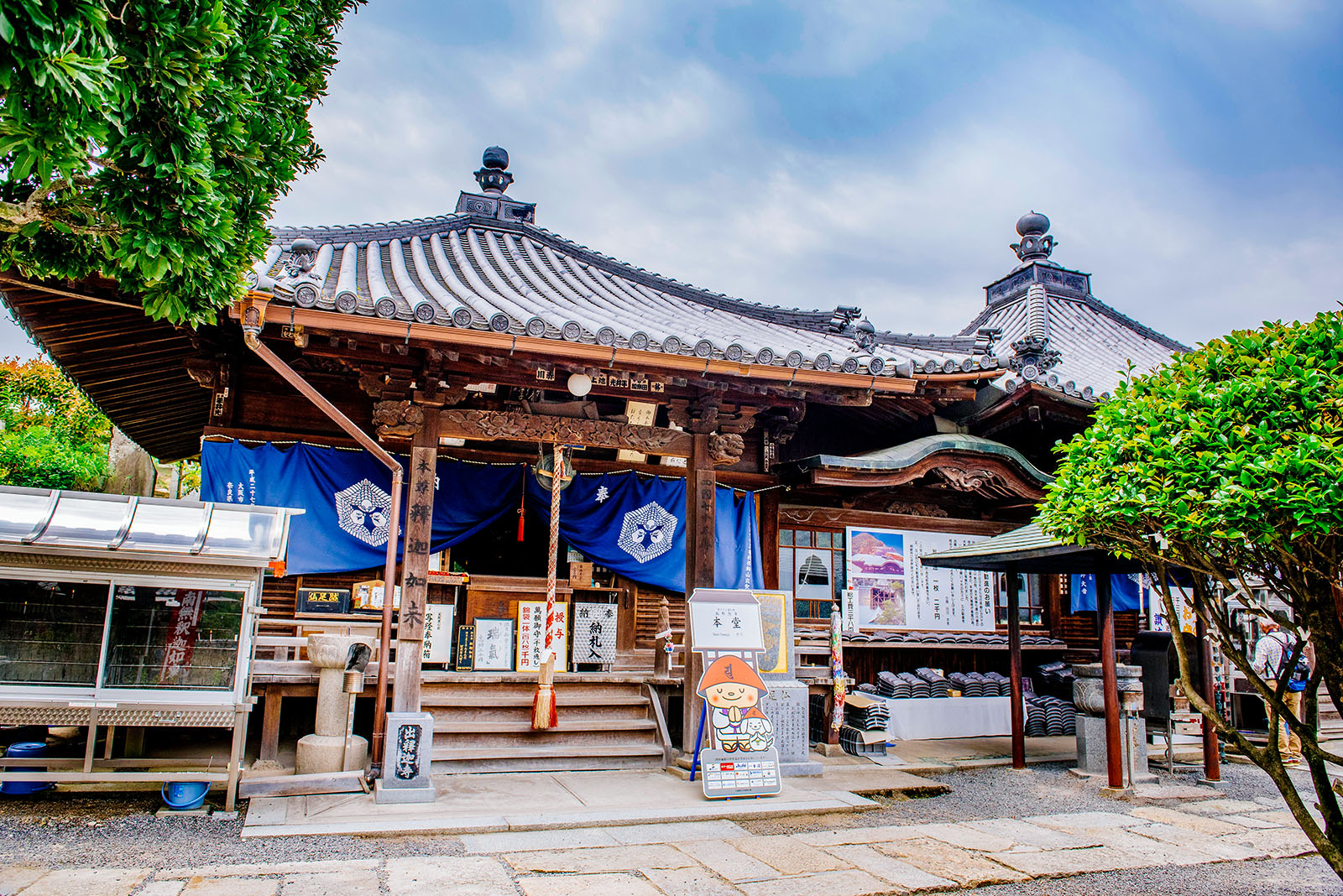 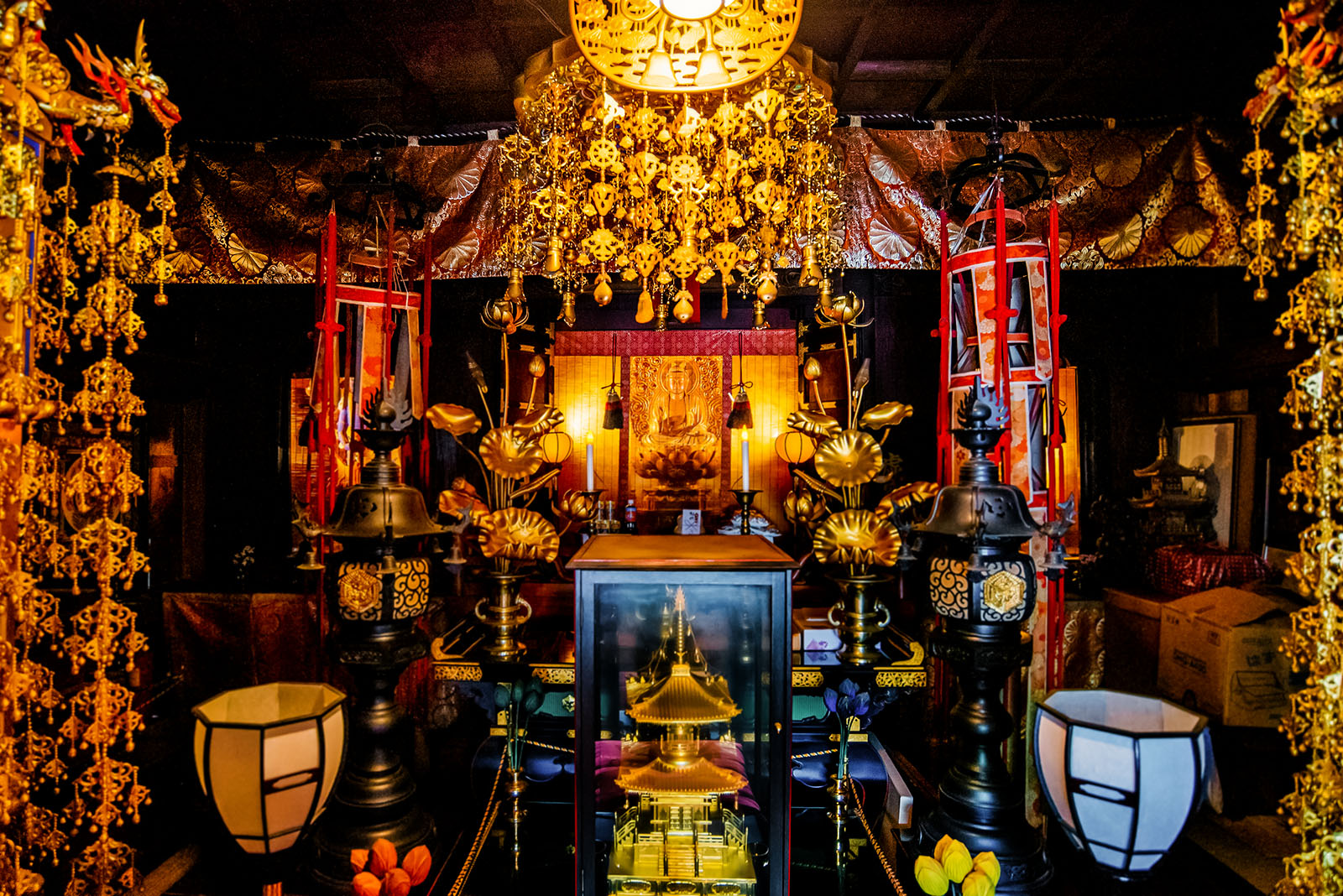 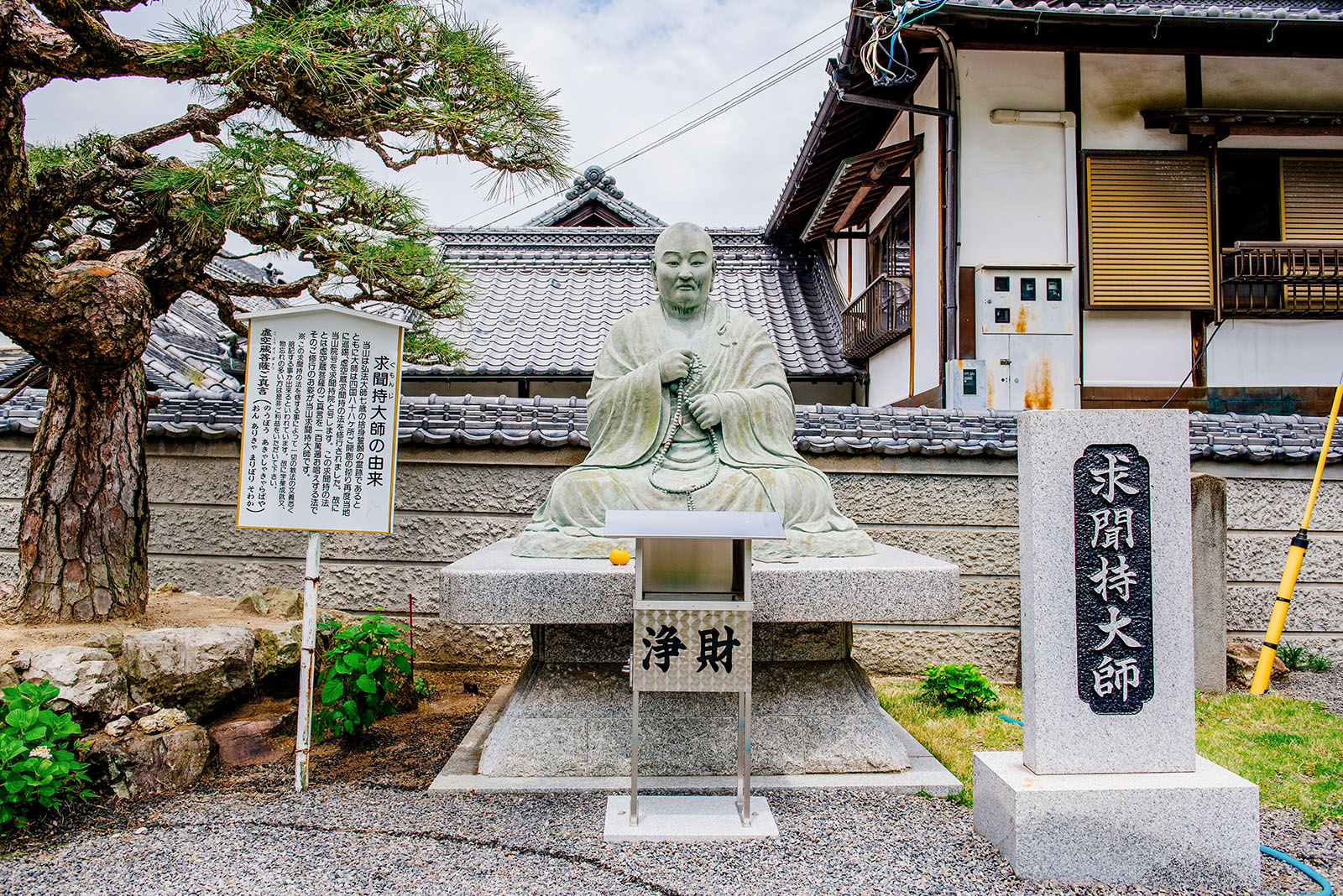 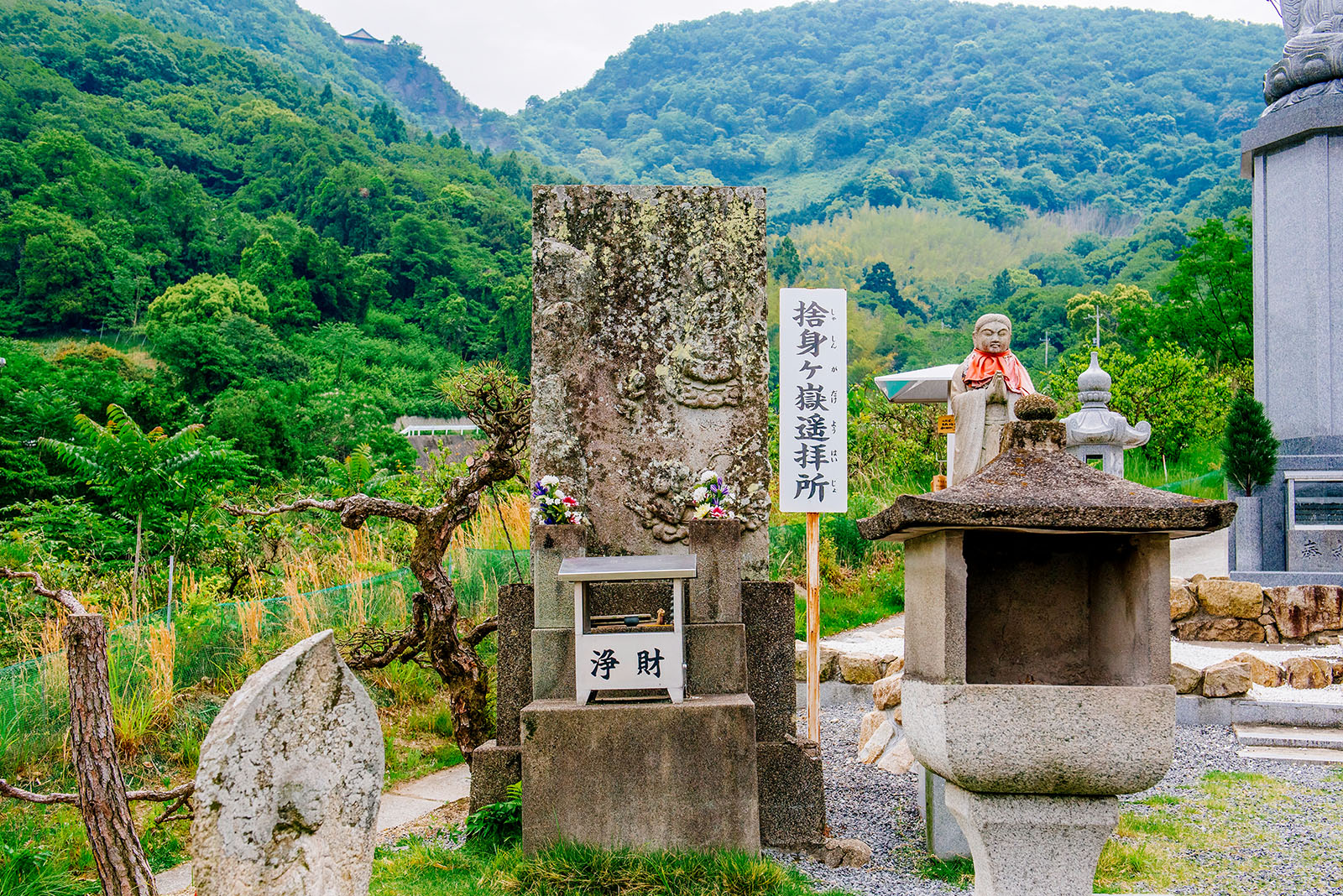 This is temple number 73 on the Shikoku Henro Pilgrimage to 88 Sacred Places. It is located at the foot of Mt. Gahaishi, and its title is Gahaishisan Gumonji-in. The title derives from the fact that Kobo Daishi pursued “Gumonji-ho”, repeating mantras of Akasagarbha ten-million times. The Honzon (the principal object of worship at a temple) is the statue of Shakyamuni Tathagata and the statue of Akasagarbha is also enshrined. According to a temple lore, when Kobo Daishi was seven years old and called Mao, he went through ascetic practices in Mt. Gahaishi. He then said, “I want to enter the Buddhist priesthood to save many people. Shakyamuni Tathagata, if my wish is to be granted, please make an appearance. If not, I will devote my life to Buddhas.” He threw himself from the cliff, and then Shakyamuni Tathagata appeared with a heavenly maiden. Little Mao was caught in the maiden’s arms, and she returned him to the cliff. When Kobo Daishi created the Shikoku Sacred Places, he again climbed up Mt. Gahaishi. At the top of the mountain, he sculptured a statue of Shakyamuni Tathagata. He then built a temple, naming it Shusshaka-ji Temple. The top of Mt. Shashingadake Zenjo, which used to be one of the site of the Shikoku Sacred Places circa 300 years ago, is currently the inner shrine of Shusshaka-ji Temple. The same blessing of praying at the inner shrine can be received by praying from the distant place of worship for Mt. Shashingatake which is located at the south of the precinct.