Statues of the Five Great Kings of Wisdom 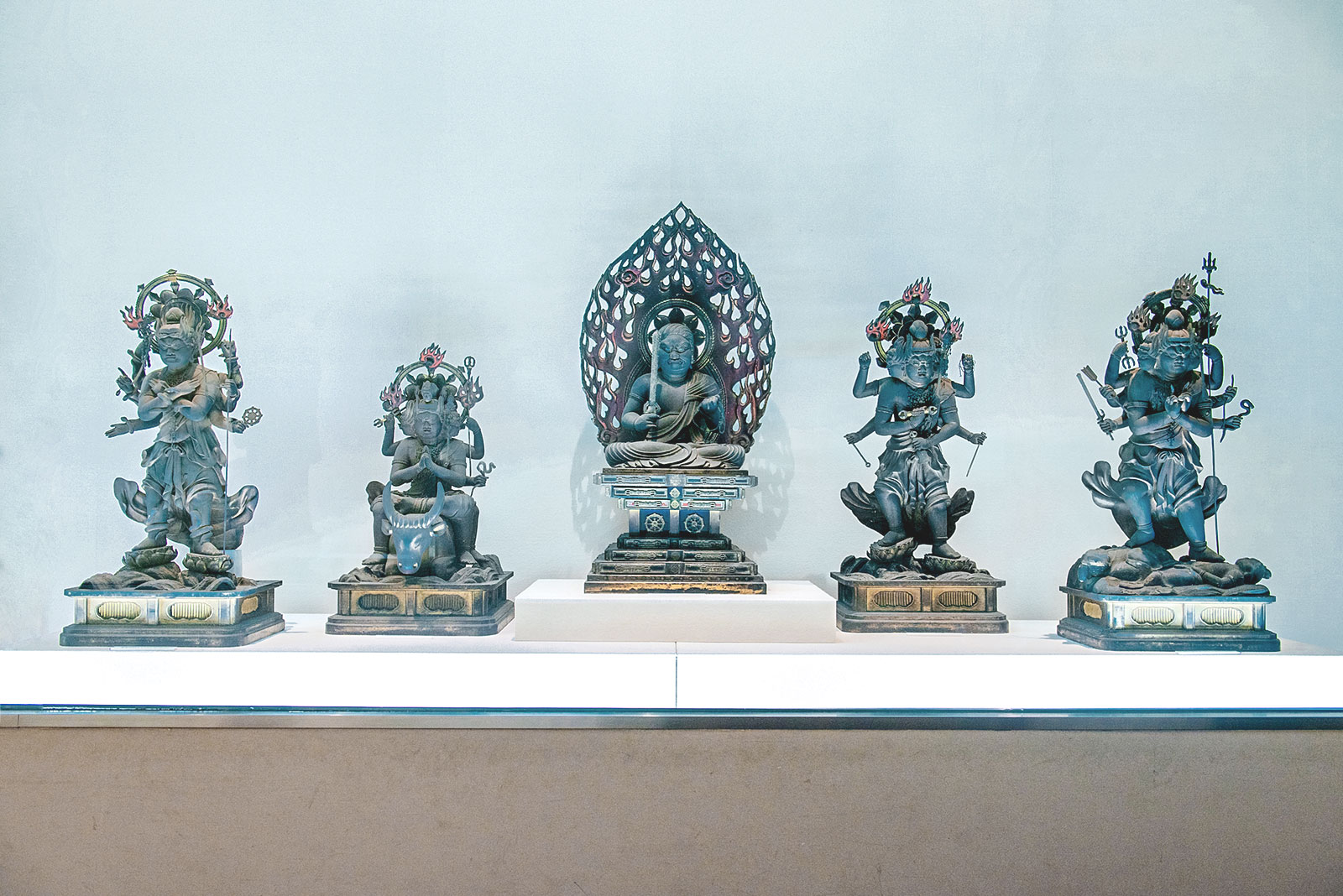 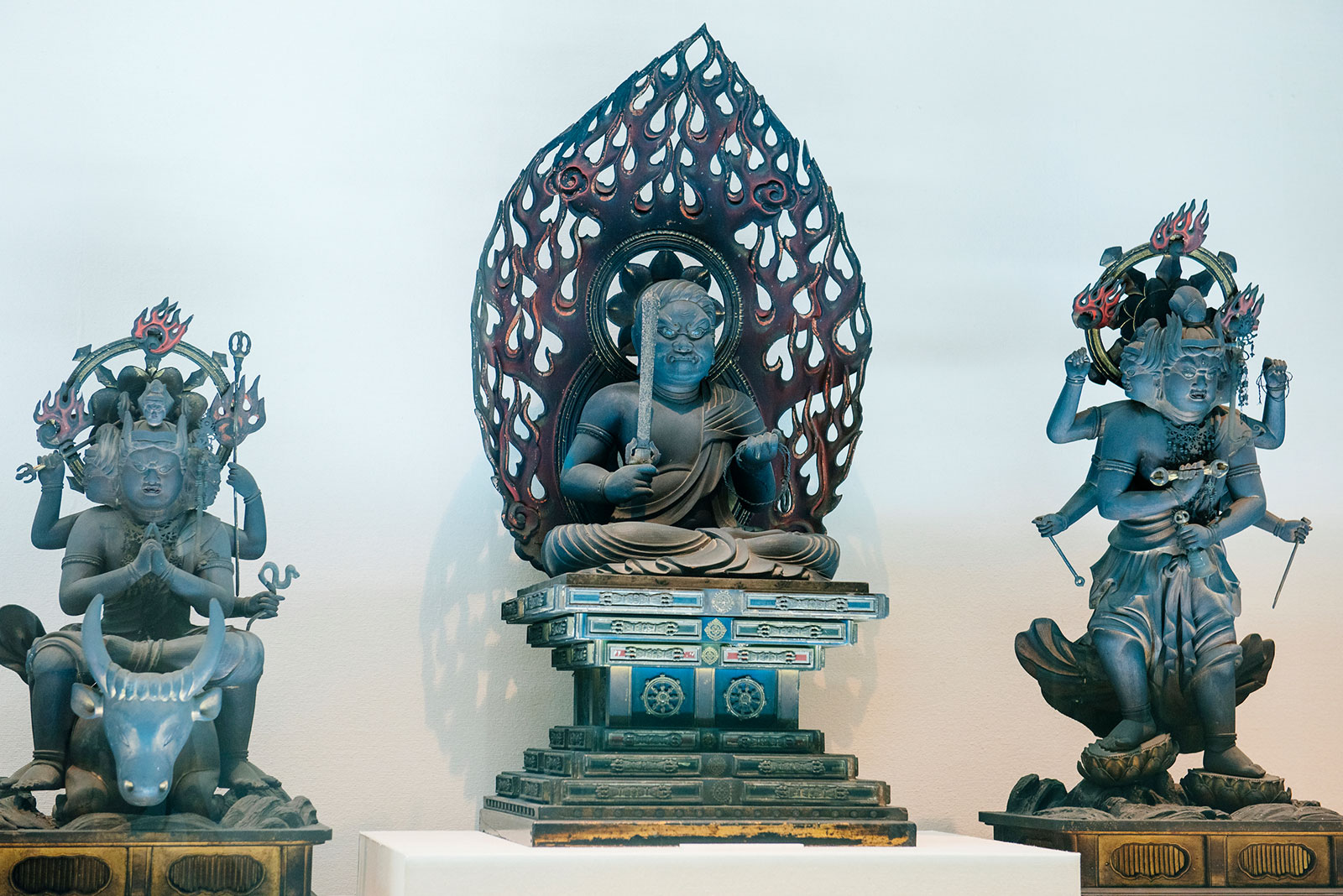 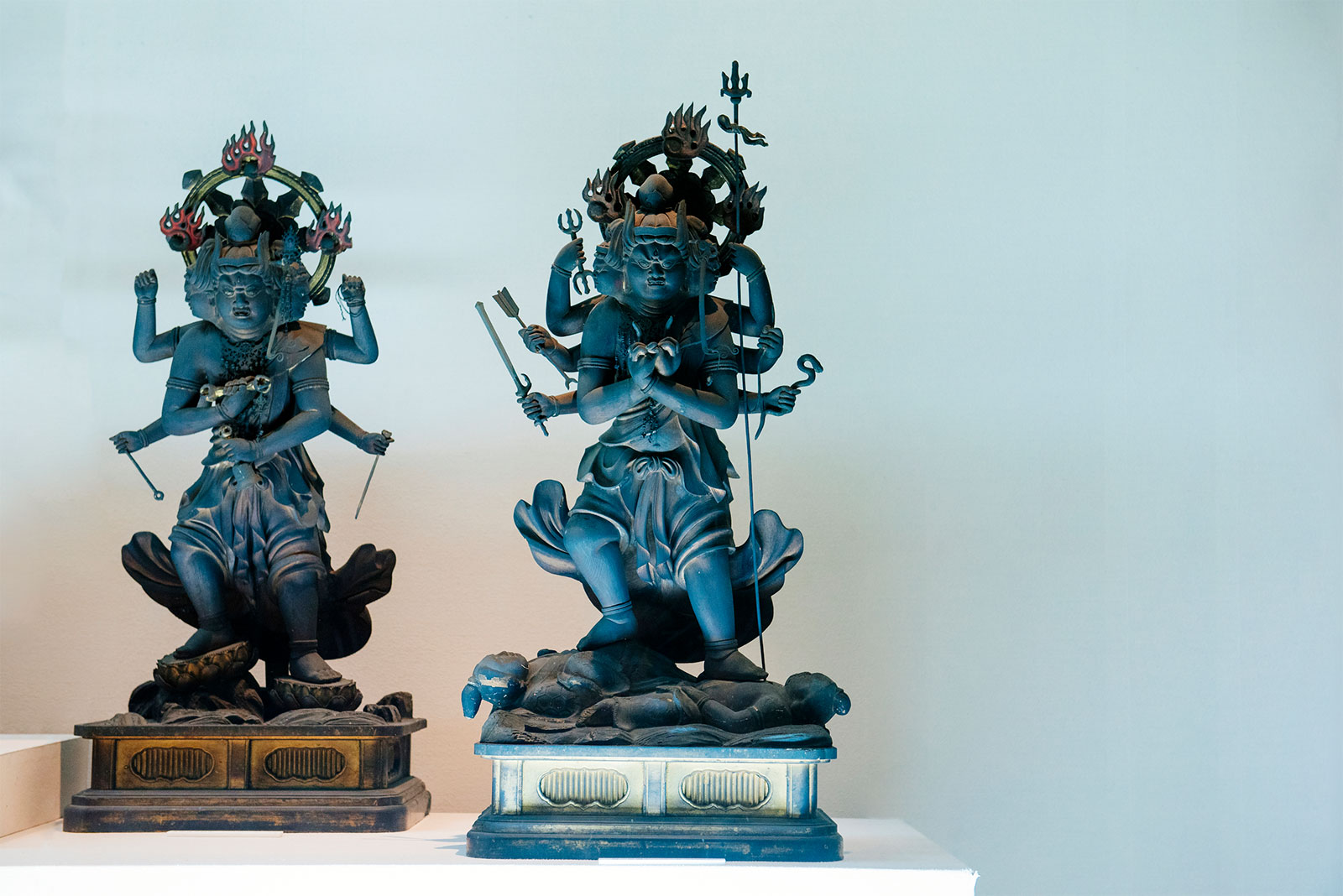 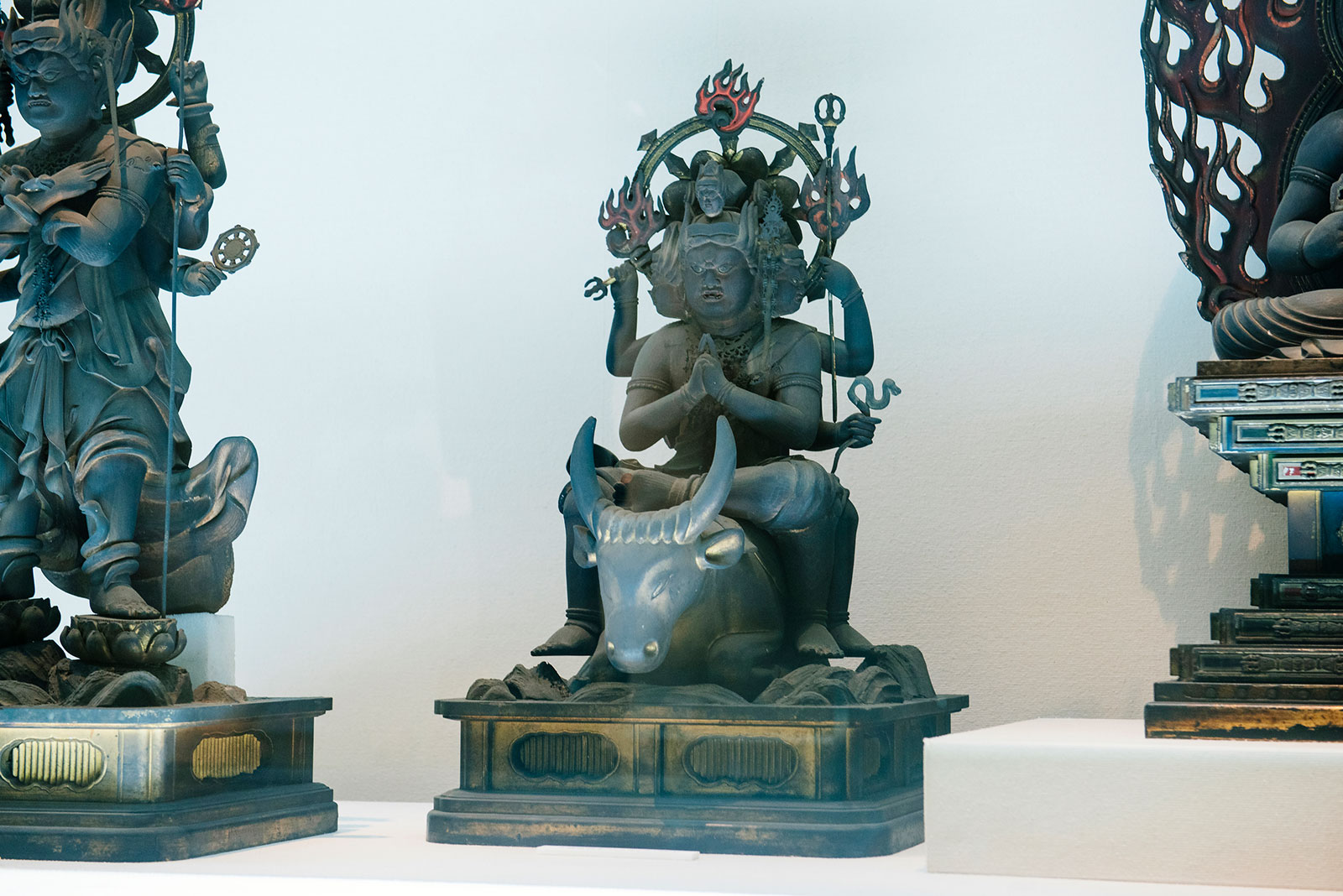 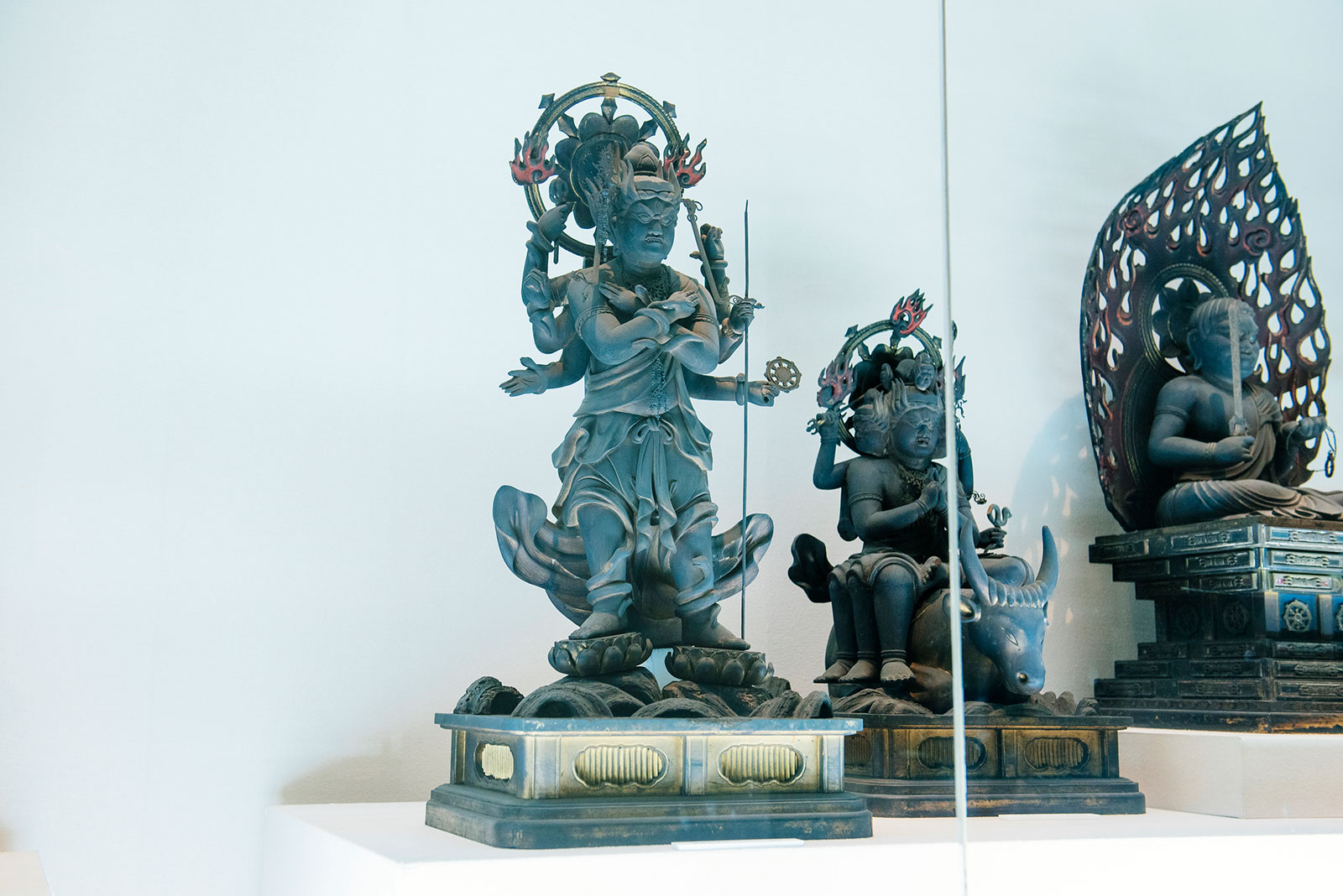 These are statues of the Five Great Kings of Wisdom. Until recent years, the Gomado stored a total of 5 statues including those of Fudo, Trailokyavijaya, Kundali, Yamantaka, and Vajrayaksa. It is said that "Myo-o" acts on behalf of Vairocana (who is at the center of all deities) and as all of mankind are ensnared to their own earthly desires, he seeks to grant them salvation even if it means bringing them to submission. For this reason, his venerable countenance carries an expression of rage, and he holds various Buddhist implements and weapons in his hands. Making use of Japanese cypress, these statues are made using a "yosegi-zukuri" technique (construction using two or more pieces of wood), and while they currently exhibit a timeworn appearance, aside from the colored paint applied to their eyes, hair portions, beards, halos, and pedestals, etc., they exhibit a base material finish. Based on the ink writing that can be found on the bottom of the Fudo Myo-o statue and the rear of the pedestals for each statue, it can be identified that they were built by Imaki Kyubei Norisada on the order of Ryudo Hoin of the Shinko-ji Temple in Marugame upon the occasion of the fulfillment of the 10,000th time "goma" offerings had been dedicated to the thousand-armed Avalokitesvara. The sculptor of the statues was Norisada, a sculptor of Buddhist images who was prolific in Osaka during the Edo period, and he is known for such work as his statue of Kobo Daishi at Taihei-ji in Osaka. Moreover, it is unknown how these statues, which had previously been stored at Shinko-ji Temple, were transferred to Zentsu-ji.